In Alzheimer’s, Emotions May Linger After Memories Vanish

In Alzheimer’s, Emotions May Linger After Memories Vanish 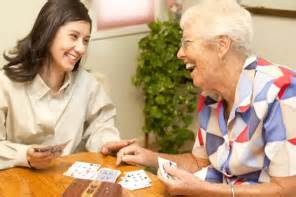 Ask any Hanson Services caregiver what they focus on when caring for a client with Alzheimer’s disease, and they will universally answer: creating positive and happy experiences in a setting where our client feels familiar, comfortable and safe. And they should know as, on average, 50% of Hanson clients are living with some form of memory loss.

Often we are contacted by the family seeking caregiving help for someone with advancing Alzheimer’s. During the assessment process, we work with families to recognize that Alzheimer’s care goes far beyond personal care and physical safety. We stress the importance of continuing the social events and outings that brought joy in the past: church, symphony, walks in the park etc. We emphasize the value of enlisting experienced caregivers who can provide engaged and meaningful interactions, even if the specifics are quickly forgotten by the client.

Families also struggle with care decisions for a person living alone or with a spouse who is becoming overwhelmed. Is it better to move them from their home? Sometimes families think where someone with Alzheimer’s lives is irrelevant because they can’t remember anyway, as long as they are being well cared for. Our experience often shows that even if someone with Alzheimer’s doesn’t remember a certain experience, such as moving from their home, the emotional stress and agitation lingers, sometimes with a precipitous decline in cognition. Now a recent study conducted by The Society of Cognitive and Neurological Behavior finds that in those with Alzheimer’s disease, emotions linger long after the memory of the experience has been lost. A recent article, published by Reuters Health, outlines the studies findings. See below for more:

In Alzheimer’s, emotions may linger after memories vanish
By Shereen Lehman

(Reuters Health) – In a small U.S. study, Alzheimer’s patients felt sad or happy long after viewing video clips designed to induce those emotions, and long after having forgotten details of the videos or ever having seen them.

The research team says the results show that loved ones and caregivers need to foster positive emotional experiences for Alzheimer’s patients, even if they think the person won’t remember it later.

“They might not be able to tell you what happened but the emotions that those actions elicited are still there,” said Guzmán-Vélez, a psychology researcher at the University of Iowa who led the study.

In 2010, her coauthors found that people with neurological damage in the memory center of the brain, the hippocampus, could still feel emotions related to an experience even if they couldn’t remember the experience itself.

Since emotions and the thoughts that “make” us feel them – such as sadness over the loss of a relationship – often seem inseparable, the study team wanted to see if emotional processing independent of memory was also happening in Alzheimer’s patients.

As reported online in Cognitive and Behavioral Neurology, Guzmán-Vélez and her colleagues enrolled 17 people with early Alzheimer’s disease and 17 healthy people of similar age to use as a comparison group.

The researchers asked the participants to say how they felt “right now, at the present moment,” before watching a series of eight scenes from films and television shows designed to induce sadness. Participants could indicate, for example, whether they felt happy, very happy, sad, very sad, etc.

The participants were asked about their emotions again as soon as the video clips ended. Then, about five minutes later, the researchers gave the participants a memory test to see if they could recall what they had just seen.

The participants answered similar questions two more times – about 15 minutes and 30 minutes after the movies ended. The researchers gave the participants a five-minute break and then repeated the experiment with clips designed to induce happiness.

The Alzheimer’s patients remembered much less about the films compared to the healthy participants. Four patients were unable to recall any facts about the sad films, and one patient didn’t even remember watching any sad movies.

But both groups reported similar levels of sadness that lasted up to 30 minutes after watching the movies, including three of the four patients who couldn’t remember any details.

Five of the patients couldn’t remember any facts about the happy videos, but two of them remained happy 30 minutes after the test.

“I really hope that caregivers get the message,” Guzmán-Vélez said.

She said that it could become frustrating at times and caregivers feel like they’re doing a lot of things and sometimes it doesn’t matter.

“But it really does matter and every single thing that they do may be having an impact on the person and it matters — it’s important,” Guzmán-Vélez said.

Dr. Zaldy Tan, director of the UCLA Alzheimer’s and Dementia Care Program called the study intriguing, noting that “it shows that memory and emotion are linked and in fact, the emotions may lag behind after the memory fades away.”

“It’s a small study, so that’s something we need to kind of be cautious about, and also, they only looked at people with mild disease,” said Tan, who was not involved in the research.

He said he’d like to see larger studies done with people in other stages of the disease.

“I think the important message here is that people who take care of people with memory problems, even those with early-stage dementia, should be aware that situations and emotions may profoundly impact the person they’re caring for,” Tan said.