Hooray for Hospice of the Western Reserve

Mini-stroke Is a Major Warning 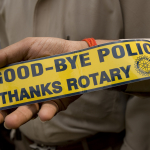 Rotarians partner together on National Immunization Day in Moradabad, India.

Post-Polio support is provided by Hanson Services, but may one day be a service that we no longer need to offer, thanks to the efforts of Rotary International.

New cases of Polio have become almost non-existent since Rotary International launched a 35-year campaign to immunize the entire human population against polio. Rotarians in cities across the world quietly provide funds and volunteer support for world health and education and other causes.

But eradicating Polio is most impressive. New cases of Polio are rare, thanks to the Polio vaccine and the Rotarians. The World Health Organization reports a 99% decrease in new cases of Polio worldwide since the Rotary International Campaign began in 1985.

I grew up in Pittsburgh, Pennsylvania, where we are proud to claim Dr. Jonas Salk, founder of the first Polio vaccine, as one of our own. Even though he was born in New York, Dr. Salk discovered the Polio vaccine while at the University of Pittsburgh. As a Pittsburgh kid, that was enough to boast that “Pittsburgh cured Polio.” As an adult, I now believe Rotary International should get as much credit as Dr. Salk (and Pittsburgh) for at least stopping the spread of Polio.

However, despite the best efforts of Rotary International, and the polio vaccine, there is no cure for those who have already contracted the disease. About half of Polio survivors have Post-Polio Syndrome, a condition which with we are familiar at Hanson Services.

Our clients who are living with Post-Polio Syndrome have various symptoms, from fatigue to paralysis, and need varying levels of assistance, and those needs can change day to day. All have enjoyed decades of active life having survived Polio, but need extra care when the post-polio symptoms flare up.

Our caregivers are trained to provide whatever level of support is needed on any particular day. That training comes from Hanson Services Education Director, Laura Hazen who knows first hand how those needs can vary.

Laura cared for her mother, a polio survivor, and uses her own caregiving experience to teach Hanson Caregivers how to help those with paralysis, fatigue and other needs associated with Post-Polio Syndrome. With new cases of Polio diminished, it only stands to reason that Post-Polio Syndrome will one day disappear. Like, the Pittsburgh kid who claims “Pittsburgh cured polio” maybe we, at Hanson Services can claim credit. We can proudly say we provide relief from post-polio symptoms and we heartily support and belong to Rotary International.

Rotary clubs take on a project to buy and help deliver the polio vaccine to more than six million children in the Philippines.

Rotary International launches PolioPlus, the first and largest internationally coordinated private-sector support of a public health initiative, with an initial pledge of US$120 million.

Rotarians raise US$247 million for PolioPlus, more than double their fundraising goal of $120 million. The World Health Assembly passes a resolution to eradicate polio, setting up the launch of the Global Polio Eradication Initiative. More than 125 countries are polio-endemic.

Last case of wild poliovirus in the Americas.

The Western Hemisphere is declared polio-free.

Rotarians, health workers, and volunteers immunize 165 million children in China and India in a single week. Rotary launches the PolioPlus Partners program, enabling Rotarians in polio-free countries to provide financial support to their fellow Rotarians in polio-affected countries for immunization campaigns and other polio eradication activities.

The number of nations declared polio-free increases to 150. The reported incidence of polio is 85 percent less than in 1988.

The last case of wild polio occurs in the Western Pacific Region. She is a 15-month-old girl called Mum Chanty living near Phnom Penh, Cambodia.

The number of polio-endemic countries drops to four (Afghanistan, India, Nigeria, Pakistan), the lowest in human history at the time.

Rotary’s overall contribution to the eradication effort nears US$800 million. In January the Bill & Melinda Gates Foundation pledges US$355 million and issues Rotary a challenge grant of US$200 million which becomes known as Rotary’s $200 Million Challenge. This announcement will result in a combined US$555 million in support of the Global Polio Eradication Initiative.

India surpasses an entire year without a recorded case of polio and is taken off the polio endemic list. Only three countries remain polio-endemic. Rotary surpasses its $200 Million Challenge fundraising goal more than five months earlier than planned.